On Wednesday 6 of May, nine students and I went online to participate in the first Online Interschool Chess event. Like everything else, the interschool chess calendar was moved online, and this was a good event to get used to the new system.

The day kicked off with a welcoming over a Zoom call, and an explanation of how the day would operate for those who didnâ€™t know â€“ we would play seven matches against people from other schools, each round playing someone doing about as well as us at that point. The games took place on the website hosting the tournament, using a virtual board that we dragged pieces over to make our moves.

We kept up with each other during the day by using email, sending positive energy as we celebrated our wins and not getting caught up over the losses. The seven games went by incredibly quickly, partly because of a shorter game timer than usual and partly because each new set of pairings could be generated and distributed quickly. This was due to the fact that we were all communicating digitally and only had to click to connect to the game, as opposed to being in a large hall where we would have to read the printed lists and then physically find our table.

At the end of the day, we ended up being the winning Secondary team with a counted score of 18.5 points between our top four players, although the effort across the team was significant as everybody finished with at least 3 wins to their name. This win allows us to send a few people to the State finals later this year, which we will hopefully expand upon in future tournaments.

The Tournament day was completed by around midday and, after it was over, we all went back to our timetabled classes, but weâ€™d all had a great time and recaptured some sense of normalcy during a time when everythingâ€™s being delayed and cancelled.

A massive thank you to Ms Powling for organising our place in the competition and providing us with resources to continue to practice chess while Chess Club cannot meet.

If you want to participate in chess this year, there will be more competitions later in the year.

Websites such as https://www.chess.com/ and https://lichess.org/ are available 24/7 for you to play against other people or challenge your friends to help you improve your skills. 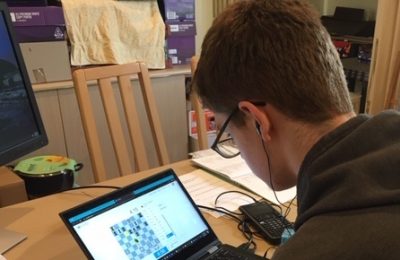