Back
Whitefriars College best team of the past 50 years

Three premiership players and multiple former club captains headline a host of footy stars to have hailed from Whitefriars College.

The Donvale-based all-boys school does not offer sport scholarships like some of its peers around Melbourne, but it has still managed to produce some serious players over recent decades.

The school’s best team of the past 50 years features father-son duo John and Marc Murphy. 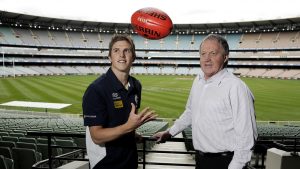 Marc Murphy with his father John Murphy at the MCG in 2008. Picture: Ellen Smith

His football CV also included five best-and-fairest awards with Fitzroy and one with South Melbourne.

Marc Murphy was eligible to head to Brisbane as a father-son given his father’s Fitzroy links, but instead chose to join Carlton with pick one in the 2005 national draft. 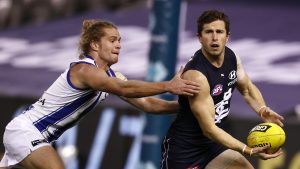 He was an All-Australian in 2011, was a two-time Carlton best-and-fairest and served as club captain for six seasons.

Two-time Essendon premiership player Paul Vander Haar is another Whitefriars product. Nicknamed ‘The Flying Dutchman’, Vander Haar played in the Bombers’ 1982 and 1985 flags during a career that spanned 201 games and saw him kick 278 goals.

Former Hawthorn, Port Adelaide and Greater Western Sydney defender Stephen Gilham is another from the school. 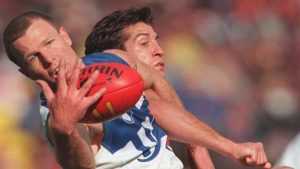 John Blakey played in two premierships with North Melbourne in the nineties.

Gilham played in the Hawks’ 2008 premiership as part of a 114-game AFL career.

Two-time North Melbourne premiership player John Blakey also won a spot in the school’s best side on a halfback flank.

Blakey played 359 VFL/AFL games with Fitzroy and North Melbourne, including in the Kangaroos 1996 and 1999 flags. 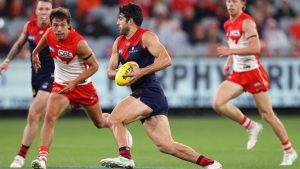 Among current AFL players, Melbourne’s Christian Petracca is the standout.

Petracca was an All-Australian and Melbourne best-and-fairest in 2020 and also finished third in the Brownlow Medal that year.

He had served as captain of Whitefriars in his final year of school in 2013.

He remains still in this year’s premiership race.

WHITEFRIARS BEST TEAM OF THE PAST 50 YEARS