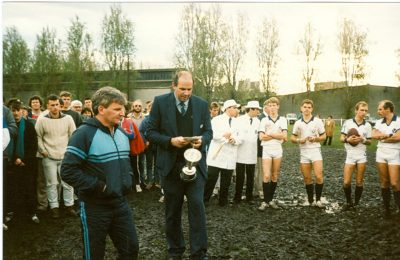 We extend our condolences to the Keane family on hearing the news that Ray Keane has passed away. Ray (a former Sergeant Major) was appointed as a football coach by Fr Peter Byrth in 1976, at a time when Whitefriars didn’t have a winning sports culture. Ray remained at Whitefriars until the early 1980s and during this time changed the attitude to sport. He got the most out of the students, making them more accountable and disciplined in all areas. Although he appeared to have a gruff exterior, Fr Noel Kierce insists this hid a kind and considerate soul. Ray’s methods worked – Whitefriars started winning! There was great pride in the football team he coached as it went to regular appearances in the Herald Shield. That pride extended well beyond sporting prowess, it extended across the entire College.

May the Lord welcome Ray into His keeping and look with compassion and gentleness on the Keane family.