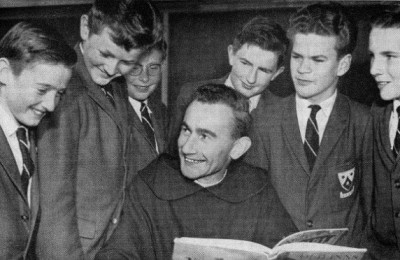 The College was informed of the passing of Fr Frank Shortis last Friday morning. The community of Whitefriars offers its condolences to Fr Frank’s personal family and to his Carmelite family.

We held an assembly for the boys on Monday and outlined the impact that this man has had on our College. He built the infrastructure, was our founding Principal and set the tone for those who were to follow. We give thanks for the life of a man who gave us our motto, Almae In Fide Parentis and who lived out our tenets of prayer, community and action.

A requiem mass was held today at Our Lady of Mt Carmel in Middle Park.

A mass of celebration for the life of Fr Frank Shortis will be held at the College on Sunday 2 August at 7pm.

Given below is an extract from an article written by Fr David Hofman on the life of Fr Frank.

May he rest in peace.

On12 March 1946 Frank joined the Carmelites, entering the Novitiate at Wahroonga (NSW). The following year he made his first profession of vows as a Carmelite and began his studies for the priesthood at Whitefriars Monastery, Donvale (VIC).

In the early 1950s the idea of expanding the Carmelites’ ministry to include education was gaining momentum in the Province. Finally a decision was made to establish a secondary school for boys on the Order’s property at Donvale. A number of Carmelites, Fr Frank among them, began studies at Melbourne University to prepare for their roles in the new school which became known as Whitefriars College.

From 1954 to 1960 while studying at Melbourne University Frank lived in the Carmelite Parish of Port Melbourne (VIC). In addition to his studies and assisting in the parish, Frank was also Acting Parish Priest at Port Melbourne and Acting Novice Master at Hunters Hill (NSW) at various times during these years.

In January 1960 Frank was named the first Headmaster of the new College which opened in January the following year. With him on staff in that first year were Fr James Pilkington, Br Thomas Butler and Fr Matthew McPhee.

For the next 12 years Frank oversaw the growth and development of the College and the formation of its staff. Especially important to Frank was the cultivation of the religious and spiritual dimensions of students’ lives.

Late in 1972 Frank was asked to be founding principal of Geoghegan College, Broadmeadows (VIC) a new co-educational, senior secondary venture of the Archdiocese of Melbourne, now known as Penola Catholic College. The project of establishing the school was marked with many frustrations, difficulties and uncertainties. Frank saw the potential of a new and different style of education for senior students, one which would help them to transition to tertiary educational opportunities.