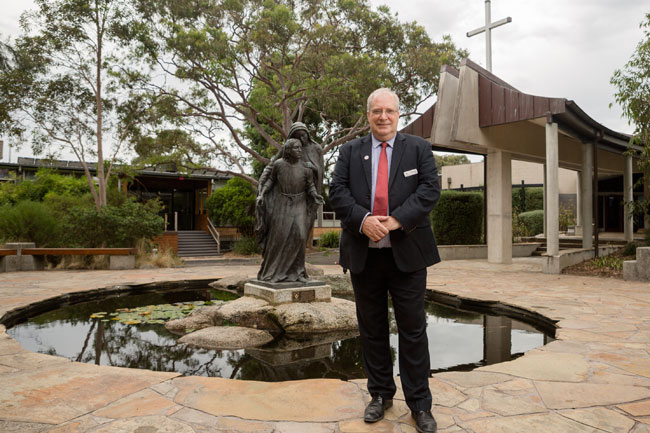 For the past 37 years, Anthony Kirley has been working in education, shaping the academic minds of young students and encouraging them to be compassionate, follow their dreams and share knowledge.

His own passion for education and strong spiritual faith started as a young student in Albury. Kirley attended Catholic primary schools, St Anne’s and St Patrick’s, where he first decided he wanted to be a teacher.

“I always wanted to be teacher – I had great respect for those who taught me,” Kirley explains. “I wished to have a positive influence on students, to be able to motivate them, share my enthusiasm for subject content with them and shape their learning.”

Kirley says he loved being a student, relishing the time he had to study his favourite subjects and play cricket and football with his classmates.

“My best memories are of having the opportunity to study subjects I really enjoyed, especially mathematics,” he says.

“Opportunities for sport and other activities such as camps and retreats were also some of the great memories I have.”

Kirley joined Whitefriars College as principal at the start of the year, bringing his wealth of experience to the school. He moved from Kolbe Catholic College in Greenvale Lakes where he was principal (the school’s first) from 2007.

It was here and at previous Catholic schools he worked at that Kirley refined his educational philosophy.

“It’s about integrating faith with the culture and life of a developing young person, with priority given to fostering each person’s best expression of self, and being compassionate and encouraging,” he says.

“To guide all to acquire skills, learn concepts, and make judgments, through a curriculum that is modern, varied and visionary. To promote student enjoyment of learning and excellence in learning.”

Kirley’s previous work at an all-boys school in Melbourne, St Joseph’s, was one of the many reasons he applied for the role at Whitefriars – as was the school’s excellent reputation.

“I have known for many years of the community’s high regard for Whitefriars College, through various associations and my work in Catholic education,” Kirley says.

“I also recognised that formation in leadership is a lifetime pursuit and believe I have the self-discipline and the capacity to continue to develop and harness skills in a new setting; ready for change and diverse responsibilities at Whitefriars.”

Kirley says what he loves most about working in all-boys education is seeing the school (and students) balance academic and extra-curricular activities each day as he did as a student.

“It’s having a balanced focus on academic and extra-curricular activities, carefully planned and implemented in the ways boys learn best,” Kirley says.

“The loyalty and trust boys have helps them learn the importance of strong bonds of friendship, teamwork and social interaction,” he says.

There have been many rewards starting at Whitefriars but equally, Kirley says, he has found challenges in his new role as principal.

“The biggest challenge is competing with the demands in a large school, of establishing new relationships with community members – students, staff, college, board, the Carmelite Provincial Council and parents – with the ongoing responsibilities of leadership and management in any setting,” he says.

Throughout his career, Kirley says he has received a lot of good advice, including taking a holistic approach to education to ensure the intellectual, emotional, social, physical and spiritual needs of the students are met. And this is something he looks forward to at Whitefriars, as well as giving students his own valuable advice.

“I advise them to learn ‘how you learn best’. Take opportunities and look for ways of creating them. Listen to and respect others. Enjoy challenges. Share your knowledge. Seek support,” Kirley says.

While in his early career Kirley was inspired by his teachers, he now takes inspiration from the strong community like those at Whitefriars, “working with a community that constantly reflects on ‘what is best for the students’; our core beliefs and Christian values; strong, positive relationships; student voice; and researching and experiencing examples of best practice.”