Globally, March is Brain Injury Awareness Month and the College has been forwarded this article that appeared on the Brain Injury Australia website.

Lachlan Green was born with an ABI [acquired brain injury] as a direct result of a forceps delivery that went horribly wrong. Lachie started at Whitefriars College in 2010 and over his six years’ here, achieved phenominal things including:

At the end of Year 12 in 2015, Lachie was awarded the Principal’s Award, which is rarely given and is based solely on staff nominations. Lachie was unanimously nominated by every staff member of the College; a first in the College’s 55-year history and testament to Lachie as a person.

On top of this, Lachie represented Whitefriars:

A read-through of the article, detailing Lachie’s extraordinary journey, links back in the end to our College motto, “We Belong, We Believe, We Become”. For Lachie and the Green family, that motto has a greater meaning: “We belong to a family and wider support network, we believe that no one is defined or confined by what happens to them, and we become stronger to face and overcome the challenges to achieve goals and make them a reality.”

Read more by clicking here and well done Lachie. You are a champion, in every sense of the word. We could not be more proud. 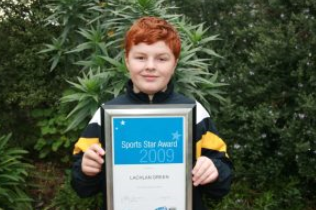