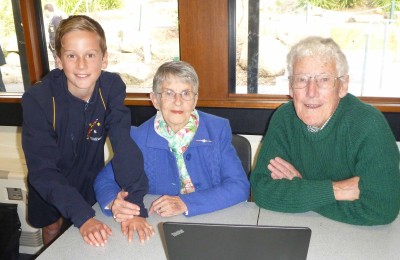 On Thursday 28 May, the Year 7s had the much looked forward to Grandparents Day. This is an annual event that was first introduced by Stein House many years ago and now involves all Year 7 students.

The Grandparents and visitors really enjoyed the insight into our secondary school lives. We met at 8.45am which was a big task for some Grandparents, having to travel a long way through peak hour traffic to get here on time.

The aim of Grandparents Day was to introduce our Grandparents to our school, because quite often, your secondary school years are the ones where you see the least of your Grandparents, and you might become a bit disconnected from them.

I think the highlight of the day for the Grandparents was seeing some of our work – mainly in Geography, R.E. and English. Then we gave them a bit of a tour around the school. This tour was guided by our Year 12 House Captain, Lewis, and our Year 11 House Vice Captain, Jackson. My classmates and I could see how our Grandparents and special visitors were impressed with the older boys.

I know that my Grandparents, in particular, were especially thrilled with the video of the Year 7 camp which was in the first few weeks of school and helped us to form many friendships. They also enjoyed the morning tea, as there were plenty of cakes and scones to go around!

Interestingly, I discovered that my Grandfather actually went to school with Fr Frank Shortis (who was the first Principal of Whitefriars) and there were just two grades between them at Assumption College!

So after the work presentations and tours we had our morning tea and Liturgy in the top gym, and then our Grandparents went home around 11.30am, thanking us for a good day.

The Grandparents Day was a huge success and we all had a great time.