On Tuesday 18 May, the Unit 1 Global Politics class welcomed Mr Michael Sukkar to Whitefriars College. Michael Sukkar is the honourable member for Deakin, and he serves in the ministry of the Morrison government as the Minister for Housing, Homelessness, Community and Social Housing.

Michael has been the member for Deakin since 2013 and before that he was a Lawyer for Ashurst Australia, then known as Blake Dawson Waldron. He studied at Melbourne and Deakin University and is also an old collegian of Aquinas College.

After being introduced to the class by myself, Michael spoke to us on how and why he got into politics and what about our political climate concerns him most. Michael stressed the importance that we as students, be strong in our convictions and that if we truly believe and have faith in an idea or concept that we must have courage in that conviction.

He also emphasised the importance of allowing others to have the same conviction in their own arguments and allowing them to voice that, even though they might say something that would go against the norm. This is Freedom of Speech, a key characteristic in Australian Democracy.

Michael discussed with us his concern that politics is being filled not only with people who are lacking convictions but with people that are from a select few professions and sectors of life and who are not representative of the electorate they represent. He stressed the need for ‘every person’ who has a passion for politics to enter the field. As he said, “whether we like it or not there is always a group of people who are going to govern us, so we might as well be active in that governance rather than be bystanders”. This powerful statement is an important reflection on how in liberal democracies such as our own, we are provided the gift of free and open elections but in recent times this has been taken for granted and we have seen how they are always going to be people who seek to remove it. And, it is the youth of democratic nations who need to defend this precious gift by becoming involved in politics.

Michael discussed with us that people entering politics must not only have a passion but are educated on the system of government. Educating young people through the school curriculum and subjects such as Global politics is important. Educating the public who are disengaged and ill-informed is also important. Educating the electorate means we could once again become a country where we see regular people enter into politics where the Prime Minister could be a Teacher, Nurse, Officer Administrator, Plumber, Fisherman, Butcher, Baker or even a Candlestick maker.

Having a well-educated population who understand the role of government and how democracy operates allows for inclusion and for the people to be governed by good government which has been voted in by an educated electorate.

Michael also fielded several questions from students such as previous work of his on the Intelligence and Security committee where he oversaw some of the work conducted by ASIO and the AFP to keep Australians safe from terrorists’ attacks and radicals. He was questioned on his opinions on whether Australia should, in the event of conflict, support Taiwanese independence with Military assistance, to which the answer was a resounding yes. To conclude Michael answered one last question about his future aspirations in the ministry and referring to an anecdote about the former member for Kooyong, Petro Georgiou, he provided this advice to us. He said Mr Georgiou had set a Precedent that if ‘the Prime Minister ever gives you a higher position in parliament then you take that opportunity’ and in that spirit he implored us to do the same.

We thank Michael Sukkar for taking the time to meet with us for over an hour and sharing his views and thoughts on the state of Australian politics in the challenging times we are all living through. 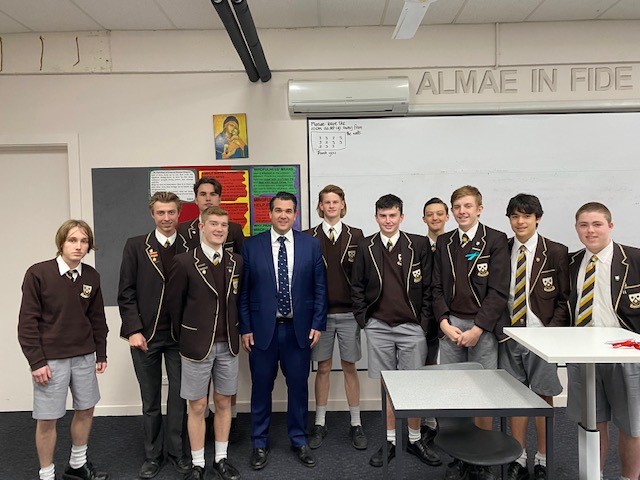