Back
From the Principal – Men and women of reconciliation and peace

Each year on Remembrance Day our College community gathers to remember those who paid the ultimate sacrifice in war defending the liberty and freedom we enjoy in this country today. At our service held yesterday I was encouraged by the reverent and prayerful way the students of Whitefriars attended to this solemn and significant ceremony. It is important to remember that this occasion is not one where we attempt to celebrate or glorify war but one where together we reflect on our role in being co-creators of a world where peace and reconciliation replace war and violence.

Of course, we all know that an end to war and violence begins simply with the way we interact with each other. This event of remembrance reminds us all of the need to respect the dignity of each human person. It is when we treat each other as less than human that the door to violence and oppression is left ajar.

To illustrate this concept, I told those assembled at our Remembrance Ceremony a story which may be familiar to some of you – the story of the “Christmas Truce”. I also provided an excerpt from a homily delivered by Pope Francis who pleads with us all for an end to violence and war in our world.

The Christmas truce was a series of widespread, unofficial ceasefires that took place along the Western Front around Christmas 1914, during World War I. Through the week leading up to Christmas, parties of German and British soldiers began to exchange seasonal greetings and songs between their trenches; on occasion, the tension was reduced to the point that individuals would walk across to talk to their opposite numbers bearing gifts. On Christmas Eve and Christmas Day, many soldiers from both sides independently ventured into “no man’s land”, where they mingled, exchanging food and souvenirs. As well as joint burial ceremonies, several meetings ended in carol-singing. Troops from both sides were also friendly enough to play games of football with one another.

The truce is seen as a symbolic moment of peace and humanity amidst one of the most violent events of modern history. In 1916, after the unprecedentedly bloody battles of The Somme and Verdun, and the beginning of widespread poison gas use, soldiers on both sides increasingly viewed the other side as less than human, and no more Christmas truces were sought.

The Book of Genesis says that we are all made in the image and likeness of God.

War and violence thrive when we view the other as less than human.

Pope Francis tells us: God’s world is a world where everyone feels responsible for the other, for the good of the other. But then we wonder: Is this the world in which we are living? “Violence, division, disagreement, war” occurs when human beings stop contemplating beauty and goodness and withdraw into their own selfishness. When we think only of ourselves, of our own interests and place ourselves in the centre, then all relationships are broken, and everything is ruined; then the door opens to violence, indifference, and conflict.

At this point I ask myself: Is it possible to change direction? Can we get out of this spiral of sorrow and death? Can we learn once again to walk and live in the ways of peace? I say: Yes, it is possible for everyone! From every corner of the world, I would like to hear us cry out: Yes, it is possible for everyone! Or even better, I would like for each one of us, from the least to the greatest, including those called to govern nations, to respond: Yes, we want it! In this moment I ask the Lord that we Christians, and our brothers and sisters of other religions, and every man and woman of good will, cry out forcefully: violence and war are never the way to peace! Let everyone be moved to investigate the depths of his or her conscience and listen to that word which says: Leave behind the self-interest that hardens your heart, overcome the indifference that makes your heart insensitive towards others. Look upon your sister and brother’s sorrow and do not add to it, and all this achieved not by conflict but by relationship! War always marks the failure of peace; it is always a defeat for humanity. Let us pray for reconciliation and peace, let us work for reconciliation and peace, and let us all become, in every place, men and women of reconciliation and peace! Amen.

Let us all today remember and honour those who paid the ultimate price for peace. Let us honour them most by becoming as Pope Francis implores us – men and women of reconciliation and peace. 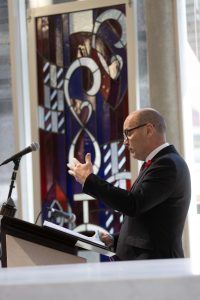 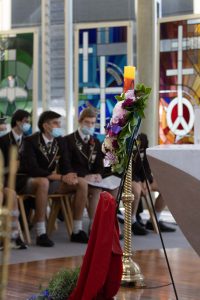 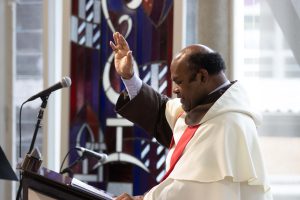