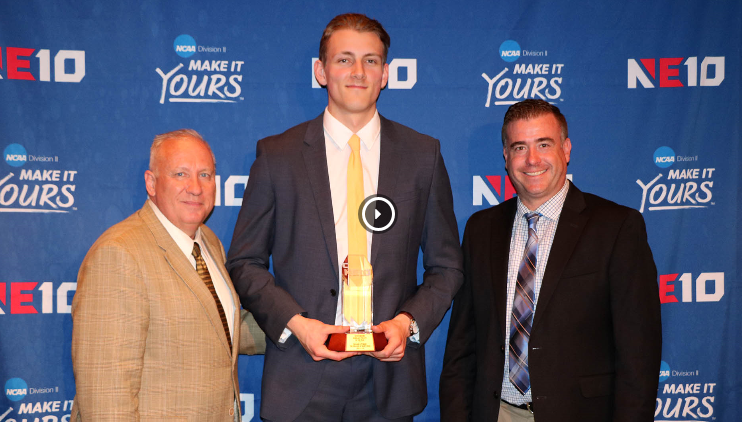 Julian Lipinski (Class of 2013) has added to his impressive resume by being recognised by the Northeast-10 Conference with one of its most prestigious awards. Lipinski, a finance major who graduated last month with a 4.00 grade-point-average following an outstanding career as a member of The College of Saint Rose men’s basketball team, was honored Monday night as the league’s Male Scholar-Athlete of the Year.

Lipinski is the third Saint Rose men’s basketball player in the last 10 years to garner this award. Dominykas Milka and Steve Dagostino were recognised in 2014 and 2008 respectively. Christina Cuffari, soccer, and Caitlin Brauer, swimming and diving, were named the NE10 Female Scholar-Athletes of the Year in 2012 and 2013 respectively.

“The Male Scholar-Athlete of the Year is quite an honor when you consider there are some 2000 men playing in the prestigious NE10. We’re all very proud and happy for Julian. A perfect 4.00 GPA in finance is not an easy feat and to accomplish this while helping lead our team to back-to-back NCAA Tournament appearances, living 10,000 miles from his family, and serving as President of the Saint Rose Student Athlete Advisory Committee is pretty amazing,” said head coach Brian Beaury.

Lipinski was also named to the College Sports Information Directors of America Academic All-America® Team, was tabbed an NE10 first-team All-League pick and was named an NE10 Academic All-Conference honoree earlier this year.

The 24th all-time leading scorer and 16th all-time rebounder in program annals, Lipinski recorded 1,166 points and 556 boards throughout his four years donning a Golden Knights uniform. He finished third in the NE10 in blocks (1.4), 12th in rebounding (6.6) and field goal percentage (.515), and 21st in scoring (13.9) as a senior. Lipinski also registered five “double-doubles” and was in twin-figures scoring throughout 23 of the team’s 31 games while leading Saint Rose (21-10) to its second consecutive 20-plus win campaign.

Lipinski was the Treasurer of the Saint Rose Huether School of Business Association. He worked as a Financial Consulting Intern with Ayco, a Goldman-Sachs company, last summer. He was also the runner-up in the Federal Reserve Bank of New York “Fed Challenge” and was a team-leader for the Adirondack Cup investment competition.