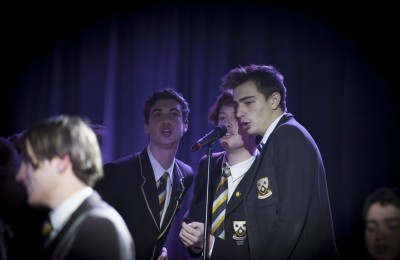 The last two days of term saw the Whitefriars Music Department, together with staff and students of numerous ensembles, participated in the Annual ‘Believe in Music Concert’. With much spirit and enthusiasm our visiting primary school students were privy to see and hear some of the College’s best performers! Students from all Year levels were involved in the day, performing and helping. Featured groups such as; Year 8 Rock Band, Guitar Ensemble, Stage Band, Drum Line, Jazz Combo, Global Rhythm, VCE Rock Band, Junior Band, Choir, Senior Band were seen and heard, and it all came together with Music Tech students in set up, sound and amazing lighting! After an hour and a half of entertainment the final performance was promised to be a show stopper. Our Music and Drama Captains Christopher Dodds and Hayden Bowkett, together with our Stage Band, closed the show with a fantastic performance of ‘Uptown Funk’ and I’m certain that the primary school students had something to sing on the bus on the way home! There was plenty of cheering, singing, dancing and screaming with such excitement throughout the performance. I would like to congratulate all students involved, performers and helpers in all areas of the concert, for the consistent hard work and practice as it certainly showed on the performances and ensured that the shows ran as smoothly as it did.

On behalf of the College I would like to say a huge thank you to Ms Fox and all the other teachers and staff for such a successful and much enjoyed Believe in Music Concert. I’m sure that the hundreds of primary school children who also attended would agree.