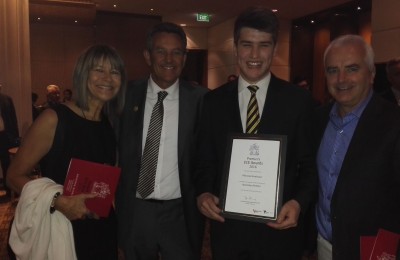 We were very pleased to attend the annual Premier’s Awards at Crown Palladium last week. We were invited on this occasion to acknowledge Nicholas Bredhauer (Class 2015) who received an award for high achievement in VCE Australian Politics. Nicholas was one of two students in the State of Victoria who received an award for this subject, having achieved an outstanding Study Score of 46. Nicholas’ parents, Monika and Shane also attended and were justifiably very proud and pleased to see Nicholas well rewarded and acknowledged for consistently high levels of application and commitment to his VCE studies last year. Nicholas successfully managed to balance his studies whilst also committing himself, with great distinction, to the important role of College Liturgy Captain. Nicholas is currently studying Arts/Law at Monash University and is hoping to one day pursue a career in the area of human rights and international relations. We congratulate Nicholas on this excellent achievement and we wish him every success for an exciting and rewarding future.