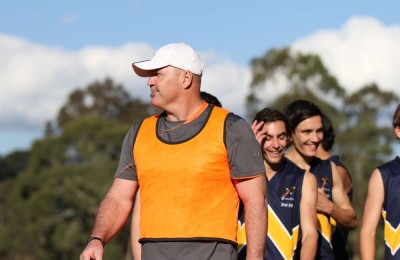 We welcomed Fox Sport to the College today to film the Senior Football 2nd XVIII Team against Salesian. We were happy with our victory and Jason Dunstall provided a great source of entertainment as the runner!

Whitefriars rich history with our great game dates back to John Murphy becoming our first Old Collegian to play at the highest level. His son Marc Murphy (drafted 2005 – Carlton) followed in his footsteps and was drafted after captaining the College team to an ACC Premiership in 2005. He has since been joined by Andy Otten (2007 – Adelaide), Ben Griffiths (2009 – Richmond) and now Christian Petracca (2014 – Melbourne). Others to have come through the College and play at the highest level include Stephen Gilham, John Blakey, Paul Van Der Haar, Brad Gotch & Tim Finocchiaro. The current College team is sitting on top of the ladder in a quest for its 3rd Premiership in succession.